All marriages go through slumps. In fact, if you’re married and you haven’t thought about lighting your spouse on fire at some point or another, we’d say you’re either lying, or else ready for sainthood.

Still, while it’s completely normal for couples to have the occasional rough patch, there’s definitely a line. After all, marriage is supposed to be something that brings you a deep sense of satisfaction and joy—even if it isn’t always perfect. Hence, if yours no longer is, it might be time to consider other options.

Here are five signs of an unhappy marriage, and how to tell when it might be time to move on from yours.

Silence might be golden, but if that’s all you have going on in your marriage, then you’ve moved from golden goodness straight into King Midas territory. (Remember him? The guy that turned everything he touched to gold?)

If you and your spouse are so silent that you’re no longer communicating, you have “too much of a good thing,” and something needs to change. Because being married isn’t just about sharing physical assets. It’s about sharing emotions, as well. And in order to do that, you actually have to talk to each other.

Honest, open communication strengthens the bond between a couple. It builds trust, empathy, and compassion, allowing partners to experience emotional growth together, rather than as individuals. This, in turn, creates a strong foundation capable of weathering the future.

Just as bad as too much silence is too much noise—particularly the critical kind.

Listen, we get it. No one has had to put up with your spouse’s balled-up socks, hair clippings, and annoying social habits longer than you. You are intimately familiar with their faults, shortcomings, and insecurities, and there’s a limit to how much you can take of all that before you’ve had it!

The problem is, that while a lack of communication leaves your emotional bond to languish under neglect, communicating the wrong way is kind of like throwing a series of mini grenades onto that bond, and expecting it to stay intact. In short: impossible.

Constant criticism is another sign of an unhappy marriage, and there’s only so much you can take, before something will have to give.

While endlessly nit-picking and criticizing your spouse certainly isn’t awesome, couples who don’t vent their frustrations at all might be in even worse trouble than those who do. In fact, not only is it normal for couples to fight, but it’s actually quite healthy for a relationship.

As a species, human emotions are all over the place. People process life differently, with each of our perspectives colored by the lens of individual experience. It can be frustrating, hurtful, and confusing when your spouse doesn’t see things the same way you do, but when this happens, it’s important to get your thoughts out in the open—however loudly!

Fighting gives your spouse a glimpse into your point of view (and vice versa), and when you understand where the other is coming from, suddenly those different perspectives aren’t as offensive as you thought. They actually make sense.

A lack of fighting often signals that one or both parties no longer care about understanding the other, which can be a fatal blow to a marriage.

All that being said about fighting, there are certain red flags you want to watch out for.

For example, if your fights are tainted by infidelity, it’s probably time to seek the help of a therapist or licensed marriage counselor. This is also true if you are experiencing abuse—whether physical or emotional.

While physical abuse is a little more straightforward, emotional abuse can be difficult to identify—especially when you’re in the heat of an argument, and too flustered to think straight, let alone be on the lookout for emotional sabotage.

Between romantic partners, emotional abuse can often appear as:

Abuse is never okay, and if you are experiencing any of these things, it may be time to get professional help. This is especially true if you are the victim of domestic violence, which is way beyond the scope of a healthy, garden-variety fight over miscommunication. In an abusive situation, the relationship needs more help than the individual parties can give on their own, requiring outside help. 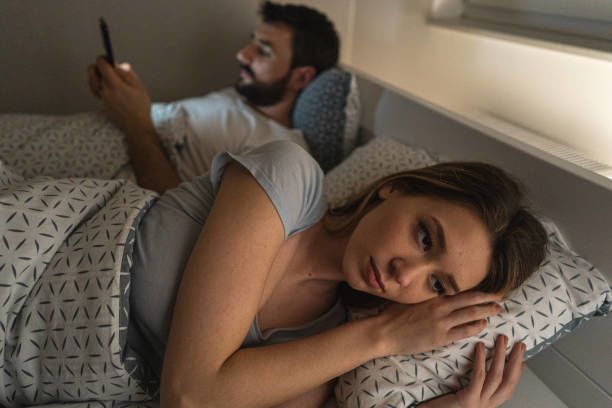 While not absolutely essential, sex is pretty darn important for a happy marriage—and not just because it’s an enjoyable pastime.

Physical intimacy relieves stress, helps you feel closer to your partner, and is essentially a physical manifestation of the emotional connection you already share. It even requires a lot of the same ingredients: trust, vulnerability, communication… (any of this sounding familiar?)

Not only that but when all these ingredients come together the right way, couples are rewarded with a surge of feel-good hormones that inadvertently strengthen another type of intimacy: emotional.

Both physical and emotional intimacy are important in a marriage. Each plays a critical role in bringing partners closer together, and both are less effective without the other. Furthermore, a lack of intimate satisfaction can often lead to other problems—especially if one spouse decides to find fulfillment outside the marriage.

To Divorce or Not to Divorce?

If you checked any of the boxes on this list, then it’s possible you’re in an unhappy marriage and might be headed for divorce. Then again, it might also just be the wakeup call you need to get things back on track.

Divorce is a drastic move, and not one you want to make unless absolutely sure. If you aren’t confident about breaking up, then it’s better to try something else, first. If at all possible, counseling should be part of this recovery—both as a couple, and as individuals. Some spouses also find it helpful to spend time apart.

Texas law does not allow legal separation. However, couples are always free to engage in an informal separation, an arrangement that still offers many of the same benefits.

If separation is something you’re thinking about, make sure to talk to your family law attorney, who can help ensure your rights are protected during your much-needed time out.

Your marriage might be showing signs of wear and tear, but simply being in an unhappy union doesn’t have to spell out doom, and there might be a way to fix things that don’t involve court. In the end, though, no one knows your marriage better than you, and if you believe it is time to walk away, we’re here to help.

For more questions about divorce and its alternatives, we want to hear from you. Call the North Texas Family Lawyers team at (972) 402-6367, or schedule a consultation online, and together, we can help you figure out what path is right for you.